Kotam.net is not an official representative or the developer of this application. Copyrighted materials belong to their respective owners
Read review
Get app Read review Hype your app Comments

Fortnite is a royale battle, defense a tower, zombie survival, looting and building in one game. Enjoy the hottest online multiplayer game and become a hero in the middle of this beautiful and mesmerizing world. You can download Fortnite for Windows, macOS, PlayStation 4, Nintendo Switch, Xbox One, iOS and Android.

The creators of Fortnite didn’t spare any expenses on graphic designers for this game. How amazing is it? The right answer is very! Your eyes and imagination get blown all the time you’re playing this game - so many details, so many different monsters, weapons, clothes, buildings, vehicles, etc. The characters also look amazing, they move fast, and they even have different body shapes which is rare for video games. Usually, game designers slap different clothes on the same body type.

The main idea of the game is that the world got attacked by an unknown storm and killed almost everybody. And you’re one of the brave commanders who fights against this mysterious evil force. This mode is called “Save the World”. There are two more available: Battle Royale where you have to fight against 99 of other real online players and be the last one standing. In the “Creative” mode you can build anything you want with your friends (battle arenas, buildings and even a whole island). 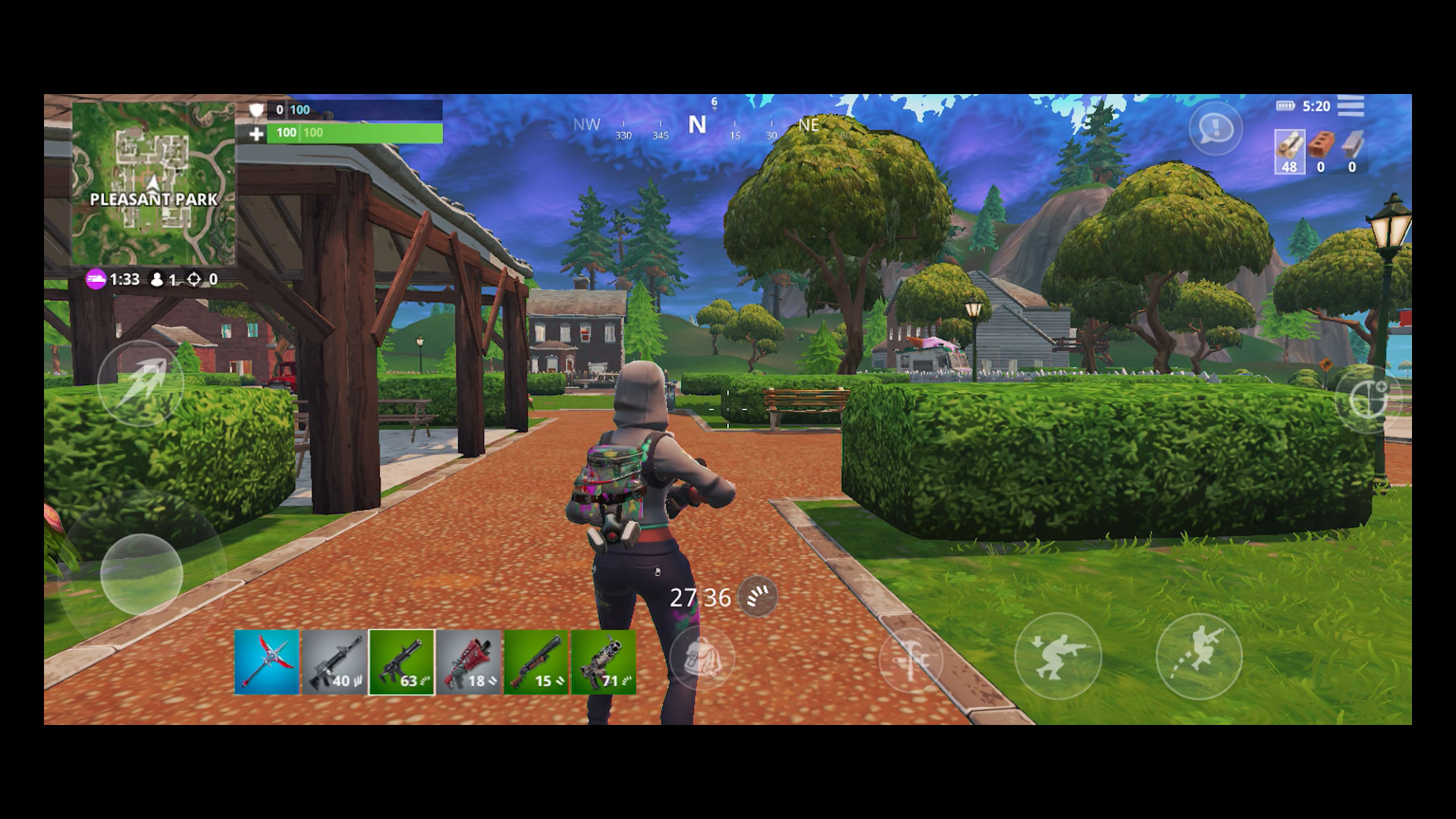 Jump back and forth from these game modes or choose one that you like the best. And it’s so cool that they’re in one place because you have to play with the same character, same engine and you can even use the same materials you gathered in a battle royale and in Save the World mode.

In this Fortnite review, we’ll focus only on iOS. As you’ve probably guessed this game performs not as well as on PC or Xbox. But of course - it’s a HUGE world with a lot of things to do in. Everything is the same as for PC, but now you’re on your mobile device where you have to tap and click away to play and sometimes it’s not easy because you have to walk, twist, turn and interact at the same time. You definitely need both hands for it.

It’s cool that the game has the story, isn't it? Now you have more motivation to play. At the same time, there’s no end to this game, and you can’t basically win permanently, but this desire to not only be the one last hero standing but to save the game’s world will drive you to get back playing it. Also, three different modes here help that as well.

You should definitely download Fortnite if you still didn’t. It’s an amazing game and now is available on your mobile devices - iPad or iPhone. But the problem is that it’s less comfortable to play this game than on PC or Xbox and it doesn't perform as well too - has glitches more often than you’d like to. Also, Fortnite can’t be played on all Apple gadgets - go to iTunes to see which ones are compatible with this game.

A great game with various missions, options, scenes and characters to play as and with. But better on Windows and Xbox still...

Pros : Beautiful graphics with many details and animation;
Very thought through the world of the game;
Three main modes available and many more options you can play in this game.

Cons : Glitches more than you can easily forgive;
Not too intuitive controls on the touch screen.

1. All review texts and other contents are original. All reviews and images of applications are subject to the copyright of Kotam editorial team and may not be copied without naming. Some of the brand names, logos and screenshots are used in order of qualified relationship.
2. All the information on this website is strictly observed all the terms and conditions of Google Ads Advertising policies, Google Unwanted Software policy and Microsoft Advertising policies.
3. We provide the official download links to legal sources like official websites, and Apple Store and Google Play Store.

Besides, the soft you're reading right now:
1. Is an app for Android and iOS devices;
2. Will not change any system settings on your smartphone.

You can get more information via the feedback form on the Disclaimer page.

Every review published on kotam.net is based on 10+ hours of real app usage experience on two or more devices (phone & tablet obligatorily). That makes every review to be complete and honest. If you found mistakes or lies in our Fortnite app review - write us right now!
I want to make review better!

Please use the direct iTunes link below to download and install latest version of Fortnite game on iPhone or iPad for free. Please note: the application may ask for additional permissions once installed on mobile device and contain in-app purchases.
Sponsored links

Fortnite FAQ: You Ask, We Answer

Sorry, no Fortnite FAQ section yet. Care to create one? Enter the comment section and provide your questions. We'll build the FAQ section based on them.
Yup, take me to comments

Get a Kotam Premium subscription and unlock exclusive ad-free access to everything we offer.